In Middlebury, VT we held our second annual moth night as part of National Moth Week on Saturday 7/29. The event is sponsored by the Otter Creek Audubon Society (Birding by day, mothing by night?) 32 people gathered in the meeting room of our local library to hear two speakers: JoAnne Russo of south eastern VT, a veteran moth-er (10 years) who has a special interest in VT Moths and is helping to compile a state list that will soon be published and Jennifer Murdoch of Middlebury who has only been on the dark side for 2 full seasons.
JoAnne shared a broad spectrum of knowledge of the characteristics of moths, the families, and online resources etc….  Jennifer focused on how her interest this year has expanded to include rearing caterpillars and shared photos of moths she had seen in the last 30 days as a sort of preview of what might be seen on the sheet later. Caterpillars and pupae were passed around…the Cecropia taking the spotlight.
Participants were invited to two viewing stations set up a couple hundred yards apart. The night was initially breezy and then cool, fewer than 30 species showed up on the sheets. Spirits were not dampened in the least and there was much excitement over every new arrival and talk of cameras and lighting equipment. The younger crowd enjoyed looking for caterpillars with the blacklight flashlight and we found out that snails glow neon blue! I think we have some new enthusiasts! 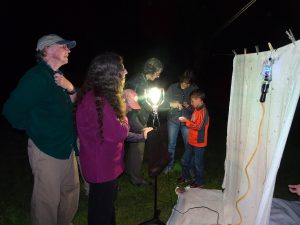 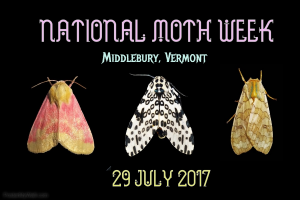 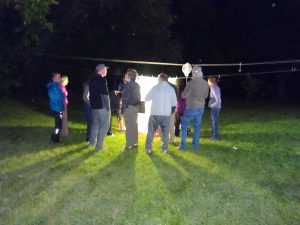 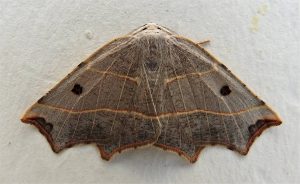